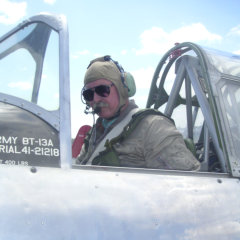 I’ve been enamored of airplanes for as long as I can remember. My boyhood home was on the final approach to NAS Moffett Field. Three and a half miles from the threshold and right on the centerline. In those days Fighter and Attack squadrons were based there and I watched Navy airplanes overhead all day long. I often rode my bike along two-lane Mountain View – Alviso Road (today’s Highway 237) to spend the day watching fighters rumble into the break. The only thing I ever wanted to be was a Naval Aviator flying fighters from boats. Still do. It’s the very pinnacle of aviation.

Less than perfect vision thwarted my Navy career and at that time I was interested in no other facet of aviation. So, armed with a degree in accounting, I disappeared into the bowels of Silicon Valley high tech firms for a twenty-five year stay. But along the way, I learned to fly.

I did well enough in my first career. I rose through the ranks into senior positions, worked in companies both large and small, met some fine folks and had some rewarding experiences. But after a quarter-century in that yoke I realized I was spending too much time having too little fun and ignoring some of life’s other responsibilities and opportunities. So with the blessing and encouragement of my good-deal wife I quit and headed for the airport. Now I spend my days doing airplane stuff with airplane people. Lucky me.

I have been fortunate to be able to fly a lot. I’ve been a pilot for fifty years and have accumulated more than 24,000 hours of flight time in more than 90 aircraft types ranging from Piper Cubs to WWII bombers. I became a flight instructor more than twenty-five years ago and have given more than 22,000 hours of dual instruction to more than 1,100 clients. It’s safe to say that I have found it to be a satisfying and rewarding profession, one I relish daily.

Though I have enjoyed immensely my career as a flight instructor – and still do – I am now starting my slide toward retirement. I’ve reduced my schedule to four days per week (Tuesday – Saturday) and narrowed my focus. I’m unable to take on Private Pilot or Instrument Rating students. These days my emphasis will be on tailwheel transition training, gentlemen’s aerobatics, aircraft checkouts, club checkouts, and phase checks. And I’m always happy to introduce folks to Warbird flying in the T-6.